It was in 1897 when the Hotel Parigi appeared in San Remo, or rather the Hotel de Paris, as can be read on the old sign visible in photos of the period yellowed by time: it immediately became one of the most prestigious hotels in Sanremo, magnificent testimony to the Belle Epoque of European tourism on the Riviera at the turn of the nineteenth and twentieth centuries. Built in 1897, the Hotel de Paris was the first work of the civil engineer Pietro Agosti, a charismatic figure and absolute protagonist of the building renovation of Sanremo and its history in those years. The structure of the hotel de Paris was sober and linear, and it already showed the style, taste and great abilities of the architect Agosti. The hotel was born as a large four-star establishment with restaurant, a building of noble majesty in pure Liberty style that, due to its location and beauty, became a  place frequented by the rich and select Italian and above all foreign clientele that for several years now had been coming to stay in Sanremo. The Hotel de Paris faced the beach and the sea and was in fact right on the Corso dell'Imperatrice, a beautiful public park full of palm trees and flowers. 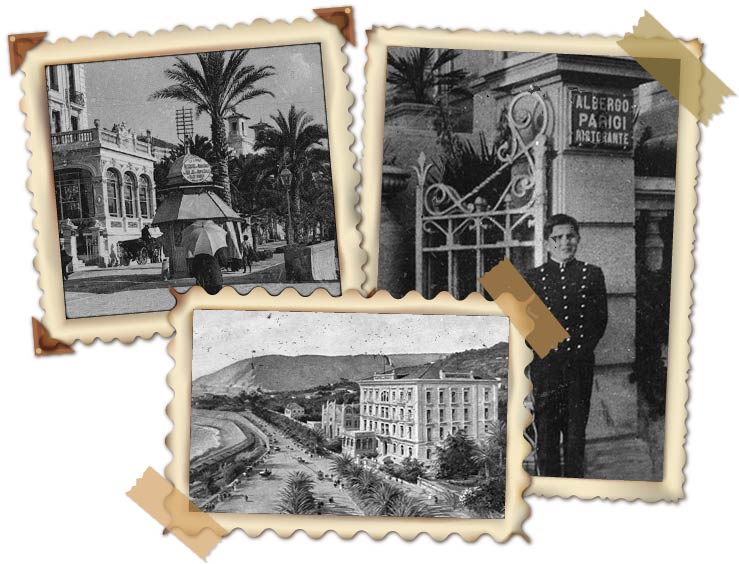 In 1904 Pietro Agosti oversaw the expansion of the right part of the ground floor, to enlarge the restaurant that was now in great demand, a sign of the growing success of the structure. To take a short step forward in the history of hotel changes, we arrive in 1936 when the doubling of the Corso dell’imperatrice made a change to the building necessary. In fact, the outer part of the restaurant was reduced in size and the original access staircase reduced, with the consequent creation of the diagonal staircase which still exists.

LThe long history of the hotel, which is intertwined with that of the city, makes us reflect on how many mysteries  its walls can reveal. Few places are as full of emotions as a great and fascinating historic hotel, which sees thousands of lives intertwined every year.

Mr. Fernando Marro, the owner of the Hotel de Paris in the 1950s, preserves a curious historical find. Making some renovations he discovered some newspaper sheets inside a hole inside a wall. The oldest newspaper is as old as the Hotel de Paris, and is an original copy dated November 7, 1897. According to an ancient custom a builder wanted to leave a message, emphasizing that present with a symbolic act: today we are here, this is my newspaper, this is today’s Hotel de Paris, also created with our hands.

The second copy is even more striking, because it is like moving the crank handle of a time machine. We arrive at 24th June 1918. The newspaper is Corriere della Sera. “Only” 21 years have passed since the first newspaper, but in the meanwhile there has been a world war, with destruction and millions of deaths all over Europe. The first page of the newspaper is unmistakable in its title: "From the Supreme Command: From  Montello to the sea the enemy, defeated and chased by our valiant troops, disrupts the Piave again. Diaz "

Precisely in the niche that contained the first newspaper, a hand, perhaps the same one as  21 years earlier, also hid the copy of Corriere della Sera, probably on the occasion of further work, closing these pages full of history behind a wall.

In Sanremo, before the world wars, the characters and the elite of countries who would fight to the death found themselves in the casino halls and in the streets, making friends and participating together at parties and banquets.
Even then communication was essential: in a city now full of high-end hotels it was essential to promote and publicize.  Brochures were created and always in multiple languages even when, in the fascist period, the name of the hotel had been "Italianized"  to the Hotel Parigi first and Hotel del Corso later.

In 1913, the Hotel de Paris appeared with its own advertising in a very important and well-followed guide, the Riviera Guide. Annuaire  Complet published under the management of Giacomo Gandolfi, Sanremo, Corso umbert I. 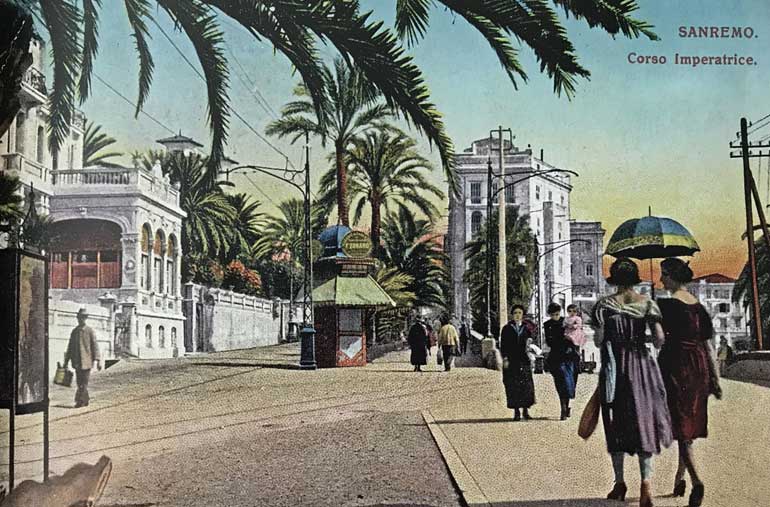 We restart the time machine and make a leap forward of about 15 years, during which Sanremo had consolidated its reputation as a pearl of elite tourism, in Italy and in Europe. Still with regard to magazines, it is with some emotion that we pick up some original copies of "San Remo au Pays du Soleil", the country of the sun, with the subtitle of "Liste Gènèrale Officielle des Etrangers."  (“General Official List of Foreigners”). We are between the two wars (in 1930), apparently still far from the new global upheaval that this time will also touch Sanremo, bombed several times during the Second World War with civilian victims and serious damage to its building and architectural heritage. An extraordinary list of guests, foreigners and Italians that confirms the international climate of previous years.

Meanwhile the years passed. World War II is approaching and there is a sort of limbo, trying to live events and carefree moments  again despite the serious European tensions. On 25th  July 1937 a guest of the hotel would have been able to attend the First Sanremo Grand Prix by looking out from one of the balconies.

In the second postwar period the Hotel de Paris was still a first-class hotel. Meanwhile, tourism in the 50s and 60s was transforming and began to be very different from that of the very particular period experienced by Sanremo, a destination for international tourism in an era during which very few people travelled for pleasure. To respond to new demands, it undertook new promotional activities, such as the Sanremo Festival, which would bring the name of the city of flowers all around the world, exporting other emotions and other feelings to an increasingly large audience.

The Hotel de Paris hosted many famous people who left their indelible mark in the "Visitor’s Book". The list of illustrious guests is truly remarkable. We recall S: A: R: Ferdinand of Savoy and the Duchess of Genoa, the then Hon. Sandro Pertini, Prince Pietro Bruno of Belmonte, Prince Odescalchi and Comm. Giorgio Pirelli. The location and the panorama the Hotel de Paris offered (and offers!) made it an ideal setting for writers, like Bonaventura Tecchi who claimed to have written extensively  from his room overlooking the sea.

Of course, to retrace in a few lines a hundred years of history of a building like the Hotel de Paris, proposing a succession of images and thoughts filled with emotions. The wonderful aura that Pietro Agosti infused into the building, that of a splendid holiday resort in which to  live the holiday in one of the most beautiful places in the world, remains indelible.

Stay up to date

Subscribe to our newsletter and stay updated on the latest offers, news and most prestigious events in Sanremo.